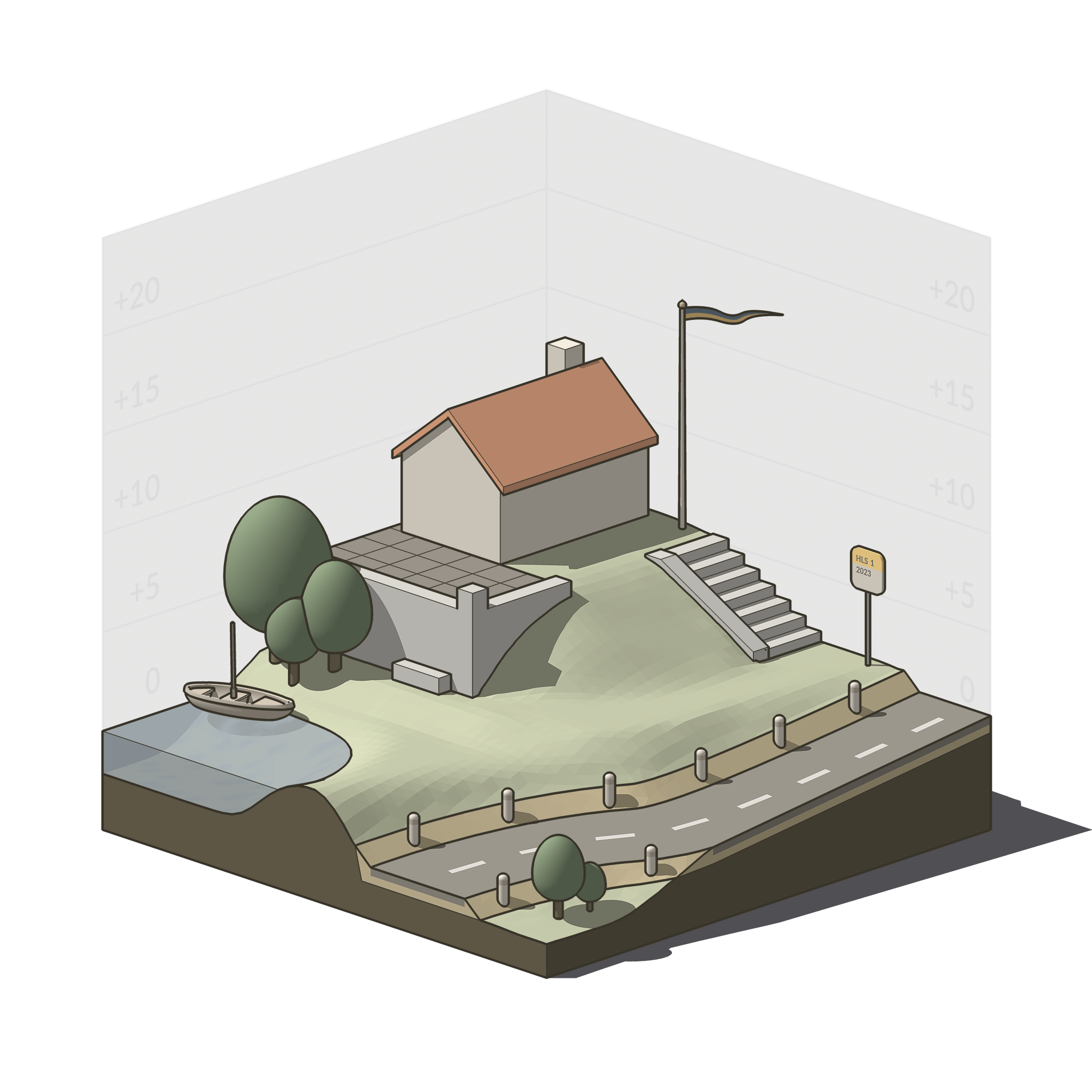 Landshape is a unified toolsuite that helps create, edit and review terrain of any size – from tightly controlled individual sites to huge freeform landscapes.

Landshape is under development by Holygon and is slated for release later in 2023.

— Want to be the first to know more about Landshape?
— Sign up below for the Holygon newsletter!​

1. Easy — means as intuitive as Sketchup itself, letting you focus on expressing your design intent, not micromanaging the software in between.

2. Accurate — means offering precision just where you need it, with full localised control of feature sharpness, smoothness, and transitions.

3. Fast — means inviting you to explore rapid realtime workflows on terrains with millions of faces.

• To be the first to know more about Landshape, simply sign up above for the newsletter.

Landshape is guided by a single vision. It brings a novel approach to digital terrain modelling, regardless of platform.

A unified toolsuite, Landshape aims to cover all fundamental tools needed for professionals and novices to create, edit and review beautiful terrain.

Landshape’s new geometry engine empowers users to work on terrains of virtually any size – from small individual sites to huge freeform landscapes with millions of faces.

Landshape is under development by Swedish Sketchup studio Holygon and is slated for release in 2023.

If you have a special request, please contact Holygon here.

What are the benefits of Landshape?

Holygon wants to change this.

The point of Landshape is to make creating, editing and reviewing 3D terrain models:

Every building needs a place on earth.
Landshape makes it yours.

Who should use Landshape – is it for me?

Landshape is a dependable tool for all who wish to easily create, edit and review accurate 3D terrain models. This includes:

Landshape is designed to be picked up easily, also by users new to terrain modelling or even 3D modelling as such.

To help you decide if Landshape is right for you, Landshape comes with a free trial period.

Is Landshape easy to use?

Landshape takes its cue from the genius user experience that is Sketchup, and attentively applies it to terrain modelling.

This means that Landshape should be easy to learn, even for users without any previous terrain or even 3D modelling experience. It should be approachable, non-technical and fun to play with, yet powerful where it counts.

Landshape should be Sketchuppy in the best sense – the sense of 3D – that millions of Sketchuppers around the world have come to know and love.

For industry professionals, Landshape provides an unmatched level of control and workflow speed.

In short – Landshape aims for effortless landscaping expressivity for all.

Accuracy means that you are in charge of the terrain, not the other way around. Good terrain follows your design intent.

Landshape features:
• terrain as an extendable canvas for expressing your ideas
• full control to add or remove edges or faces within the terrain, exactly where you want
• feature sharpness control, from razor-sharp to supply soft
• ability to exclude, solo, or lock any part of the terrain

Older terrain modelling solutions typically force users to end up in one of two camps: being either expressive-but-inaccurate, or accurate-but-unwieldy-and-awkward.

Landshape’s novel approach to terrain modelling enables you to be accurate and expressive at the same time.

User kindness is the best way to design beautiful terrain.

But how can Landshape be so fast on large terrains?

Holygon staff have been 3D modelling and developing custom extensions for Sketchup for over 10 000 hours each. Over the years, they have come to grow more familiar with leveraging the hidden power of Sketchup.

To this end, Holygon has developed a dedicated terrain geometry computation engine. It ingests, processes and outputs up to millions of terrain data points, in realtime. Its algorithms are optimised for robustness and speed. This C++ backend engine powers Landshape’s core operations.

Equally important, 10 years of hands-on Sketchup modelling experience, along with daily discussions, help Holygon to abstract away needless tool micromanagment from users, and instead focus user control into a consciously small, but carefully selected, set of interactions. These are the interactions that create most value in end users’ hands.

Effortless expressivity relies not on maximising control, but on providing the right kind of control.

By laughing in the face of adversity, challenges turn into opportunities.

Can I use any Sketchup geometry to make Landshape terrain?

You may use any Sketchup geometry to create new terrain or to edit existing terrain.

Landshape is liberal with input. As long as you have it as geometry in Sketchup, you can use it to drive terrain expression.

As input, you are free to use any Sketchup geometry, including:

In other words, you may use:

Select your input geometry, pick your command, and Landshape will do the work for you.

Can I start using Landshape on my existing terrain projects?

Landshape is designed to pick up any kind of terrain, and continue from there.

Converting a previous project to a Landshape terrain is the recommended workflow.

Conversion is quick. Simply select any existing terrain geometry as input, and let Landshape create fresh new terrain right on top. It is easy to make your new terrain fit closely to the input. You may then discard your old terrain.

The new terrain surface that Landshape creates is optimised for editing with Landshape tools.

You may also use the same method midway into a project. The best workflow is the one that fits you.

With your input selected, creating or refitting terrain is one click away.

Can I use Landshape on anything?

Yes, as long as it is Sketchup geometry.

For instance, you can modify the terrain right through buildings, walls and stairs, while keeping such built artifacts’ geometry intact.

However, it will still be possible to manually unlock Landshape tools for use on any Sketchup geometry, including non-terrain. This mode opens new creative possibilities for power users and daring designers.

What do I need to use Landshape?

Landshape comes as a paid extension – also known as a plugin or add-on – for the world’s best 3D modeling program, Sketchup Pro. An extension is a small program that works as a powerup. Sketchup Pro is available for both Windows and Mac operating systems.

To run Landshape, you need:
• A computer with Sketchup installed
• The Landshape extension

Landshape should work with Sketchup version 2017 or later. Holygon recommends using the latest version of Sketchup.

For professional or continued use, you need a Landshape license.

Can I try before I buy?

If you are using Landshape for the first time, it will start in trial mode.

This means you can try Landshape for non-commercial purposes, for a limited time.

To use Landshape for commercial purposes, or to use it after the trial period ends, you will need a valid Landshape license.

Please note that Landshape is currently not available for download.

Want to be the first to know about the release date? – Join the Landshape Newsletter.

Your trees look cute. Can I add vegetation, too?

Ever since Holygon’s stylized trees grew up in 2018, people have kept asking Holygon about those little ent-ities and how to place them.

Landshape makes it easy to create large swaths of terrain.

Once created, the terrain soon perceived that it was naked, and started screaming for vegetation.

Holygon is working on a solution that should at least cover the bare essentials. This solution will be announced alongside the release of Landshape.

The sidekick extension, suitable for vegetarians of all stripes, is the perfect companion for dressing up your Landshape creations in nature’s finest garb.

Will Landshape terrain be solid and 3D printable?

Landshape’s output should be 3D-printable.

Landshape keeps different parts of the terrain in different groups. Their combination should always produce one single solid.

So implicitly, Landshape terrain should always be one single 3D printable solid.

This means that if you export the entire terrain to any standard 3D printing priming application, it is typically a one-button operation to turn the terrain geometry into a monosolid.

Or, you may always produce a monosolid manually, simply by exploding all Landshape containers and grouping the raw geometry.

I really need feature X – can you include it?

Landshape exists for its users.

Your ideas help make Landshape create value for all.

As developers, we are always interested in understanding which specific terrain-related problems you most wish that Landshape should help you solve. We would also like to know how a solution would create end value for you.

You are welcome to share your ideas for possible Landshape features, tweaks, and fixes.

We respond to every enquiry.

Landshape is developed by Holygon and special project contributors. Individuals who are or have been contributing to ideation, tool design and programming include Anders Lyhagen, Felix Heuman, Christina Eneroth, and Daniel Tal.

Holygon is a Sketchup-based software development and design company based in the 1000-year old tech-hub city of Lund, in southernmost Sweden, close to Copenhagen.

Since 2013, Holygon has been inventing and developing close to 100 custom Sketchup extensions for clients all over the world, often in the design and construction business.

Holygon’s clients are based in the U.S.A., Great Britain, Germany, Switzerland, United Arab Emirates, Australia, the Nordic countries, and other countries.

Holygon’s extensions have all been business-to-business. Until now. Landshape will be Holygon’ first public Sketchup extension.

Where can I buy Landshape?

Currently, Landshape is not available to the public.

Landshape is in the alpha stage, which means that it is not yet ready for launch, but it is being prepared.

When Landshape 1.0 is released, you will be able to obtain a download via landshape.com, via holygon.com, via Sketchup Extension Warehouse, and likely via other places.

We are working to offer Landshape through a wider range of channels.

To be the first to know about the upcoming release – simply join the newsletter.

What is the price of a Landshape license?

Landshape is a toolsuite aimed at professional users, and will be priced accordingly.

The price will be announced at launch.

When will Landshape be released?

To be the first to know – join the newsletter.

I have another question, or feedback – can you help me?

We are looking forward to hearing your ideas, questions and suggestions regarding Landshape, Holygon, and related.

We are especially interested in understanding which specific problems or general challenges you most wish Landshape should help you solve, and why.

If you wish to share ideas or concepts for possible Landshape features, tweaks or fixes, we are also very interested.

We read all emails. Even if it takes a while, we respond to every enquiry.

Holygon will occasionally email you Landshape news, Sketchup insights, and other relevant content. You may unsubscribe at any time via a link in the newsletter that you receive.